In Marty Haugen’s composition of “Canticle of the Sun”, we hear: “The heavens are telling the glory of God and all creation is shouting for joy! Come dance in the forest, come play in the field and sing…sing – to the glory of the Lord!” As spring, and in some places, summer-like weather dawns upon Canada, we can feel the impulse of Catholics to get outside and celebrate God in many ways.

Parishioners of Our Lady of Mount Carmel celebrated the 150th anniversary of the church building in which we worship – yes indeed when you look at Our Lady of Mount Carmel in Toronto, the building was opened 150 years ago – yes indeed, the same year Canada became a country. We also celebrated the 50th anniversary of the first Chinese Catholic parish in the Archdiocese of Toronto. 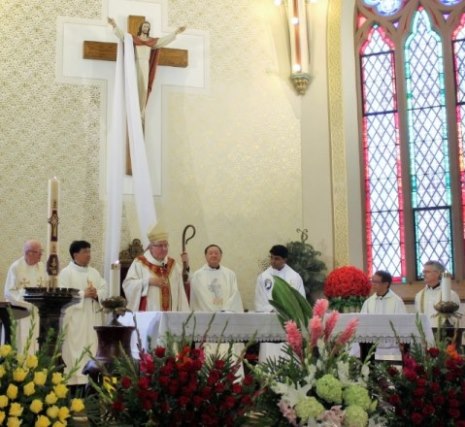 We started with Mass in the church presided by Cardinal Thomas Collins. (Concelebrants from l. to r. Carl Schmidt C.Ss.R., John Feng – associate pastor, Peter Chin C.Ss.R. – pastor, Shijo Meppilly C.Ss.R., Peter Siu S.J., David Purcell C.Ss.R..) We then prayed at the doors of the church while gathered around a statue of Mary and then headed out in procession throughout the neighbouring streets.

Of course there was lots of colour! … including banners, a Knights of Columbus colour guard, a marching band, blue hats, and Canadian and Papal flags. 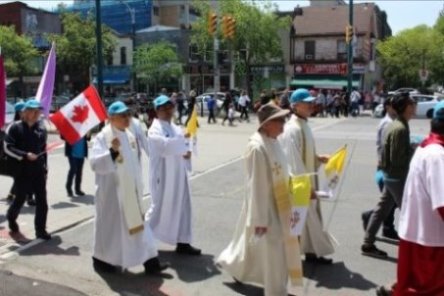 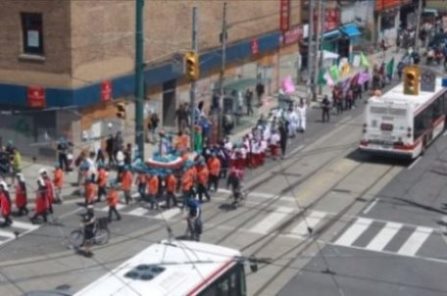 Do you recognize any of these Redemptorists in the procession?! It might be difficult because of the sunglasses. During the afternoon, at the parish centre, a number of parishioners gave video presentations about the history of Our Lady of Mount Carmel church and the Chinese Catholic parish. We Redemptorists were also given a chance to promote our community through testimony and through a vocation display.

Of course, another staple of these celebrations is FOOD – and lots of it! An evening dinner was punctuated by song and poetry and speeches and prayer. Here we see Frs. Carl, Shijo and Peter and others waking up the lions for a traditional lion dance and, of course, the clergy are always invited to belt out with one voice a joyful song! 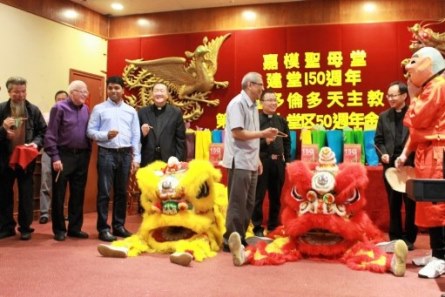 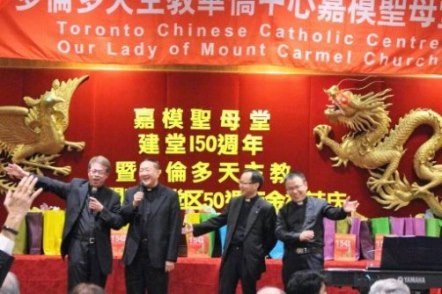 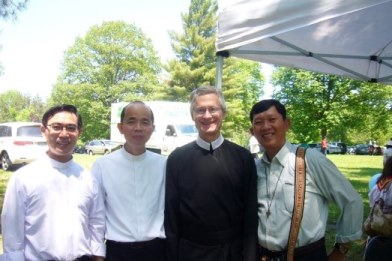 On the 10th of June at the Martyrs’ Shrine near Midland, Ontario, 3000 Vietnamese Catholics gathered for a pilgrimage. Some opening devotions were held at the Shrine church at 10 am. The crowds continued to build in the fields near the church while families and friends shared fun and lots of food together. Among those gathering were l. to r. Redemptorist Frs. Antony Nguyen van Dung, Francis Nguyen, David Purcell and Jean-Baptiste Nguyen Thanh Hung.

Fr. Jean-Baptiste is on a holiday in Canada and decided to join in the festivities. There is always a special catechism for young people at this gathering and he was asked to speak to the young people gathered there. 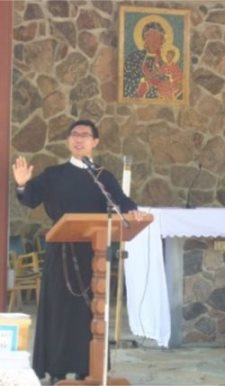 Fr. Anthony (some will remember him as living at St. Patrick’s rectory, Toronto, during recent studies – he is now teaching in Vietnam) was the guest speaker during the afternoon. In honour of the 100th anniversary of Our Lady of Fatima, he gave a very inspiring testimony to the message and the place of Mary in our lives of faith, and spoke about the witness given by the children to whom Mary appeared at Fatima. 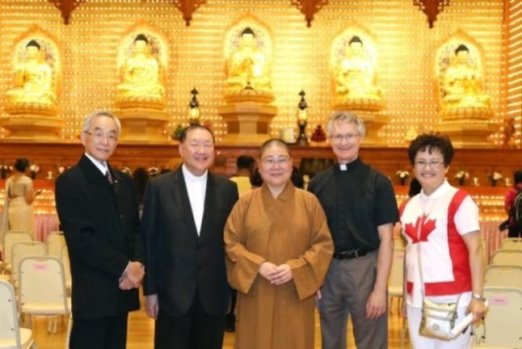 As you may know, Fr. Peter Chin is the chair of the Toronto Archdiocesan Pastoral Council for Chinese Catholics. As such he represents Cardinal Collins at some religious functions in the Toronto area. On the 11th of June, Fr. Peter led a prayer on behalf of the Catholic community at an interfaith prayer gathering for Peace, and for God’s blessing on the 150th Anniversary of Canada. He chose for his text, Matthew 5.5-9: Blessed are the peacemakers…Here we see l. to r.; Mr. Thomas Chung, parishioner at Our Lady of Mount Carmel; Fr. Peter; our hostess, Abbess of the Fo Guang Shan Temple in Mississauga, the Venerable Yung Ku; myself, and our liaison with the Temple, Ms. Mabel Lam. 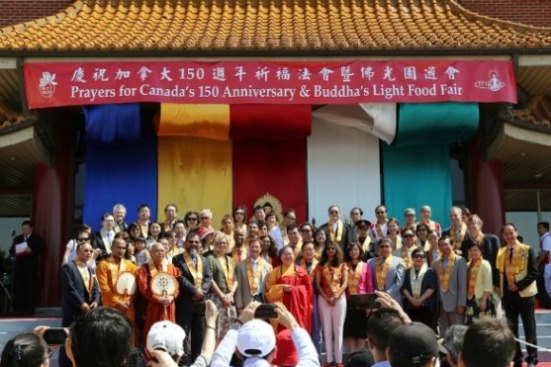 Ministers of the federal government brought greetings from the Prime Minister and every level of civil government was represented at this gathering, along with community representatives from the university, police force, and social services. Did I mention lots of food at these summer gatherings!? A vegetarian food fair held on the Temple grounds, followed the prayer and speeches and was attended by hundreds and hundreds of people throughout the afternoon.

I appreciate very much that Frs. Santo Arrigo and Ed Eherer, with the help of the Redemptorist community at St. Patrick’s, Toronto, hosted a vocation supper at the beginning of June. Also, our community in Grande Prairie, hosted a vocation supper toward the end of June. Thank-you! I also encourage you to take advantage of any other gatherings of Redemptorists, (for example, if you have something special for the Feast of St. Alphonsus) by inviting men to come and get to know the Redemptorists through these occasions.

Also, if you have any pilgrimage type gatherings later this summer, please take the opportunity to promote the Redemptorists by putting up the display that each community has in their possession. If you need any materials to hand out to people as you meet with them personally at these gatherings this summer, then you can easily obtain them through myself or Kathy McMerty.

I was very encouraged by a homily that I heard on the Feast of the Body and Blood of Christ. I was encouraged in part because it was a little out of the ordinary. Sometimes we hear a song or a joke or a story told to illustrate a message from the Sunday texts. This time poetry was used as an introduction for the homily. Not only poetry, but original poetry written by Fr. Ed Eherer, who was the homilist that day. This poem was inspired by a popular folktale. It was encouragement to me that we Redemptorists have many talents and I can use a variety of talents while preaching.

The poem helped me to relate to the mystery of the Eucharist. Moreover, the last stanza gave me words to describe the blessing I had just experienced while celebrating all of these pilgrimages and gatherings with people in May and June. Fr. Ed Eherer graciously consented to my sharing this with you, as I know this poem will bless and encourage you as well. 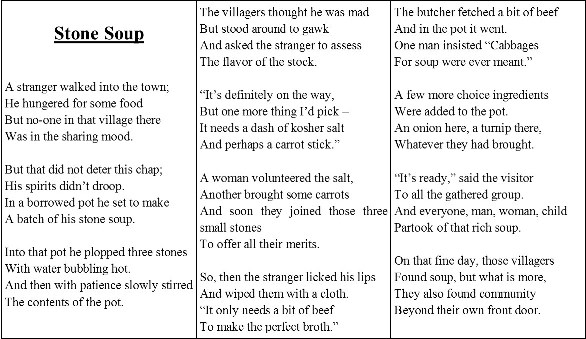