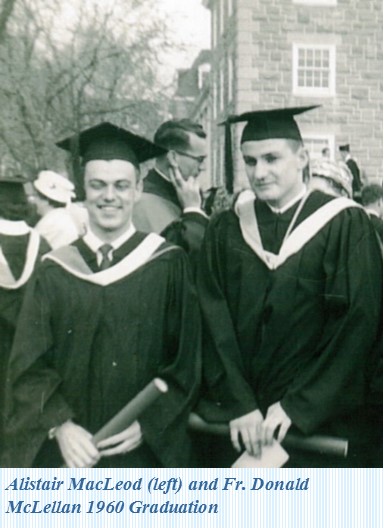 The death of acclaimed Canadian writer Alistair MacLeod in April led to an Archives photograph of him with Fr. Donald MacLellan at their university graduation in 1960.

Peggy Kennedy, Fr. MacLellan’s sister, recalled that the photo was taken to commemorate the great day for the two scholars from the farms of Dunvegan, Inverness County.

Both were descended from the Scottish immigrants, who had settled on farms on Cape Breton’s west coast. Alistair MacLeod was born in North Battleford, SK in 1936 when his parents had migrated from Cape Breton to homestead during the Depression. When Alistair was 10, his family returned to the family farmhouse in Dunvegan.

Alistair and Donald, who was two years younger, attended Dunvegan public school and St. Margaret’s Church, Broad Cove. After high school graduation, MacLeod delivered milk from a horse-drawn w8agon for a year in Edmonton, attended the Nova Scotia Teachers College in Truro and then taught school for a year on Port Hood Island off Cape Breton’s west coast. To finance his university education, MacLeod worked summers drilling and blasting in mines, in BC, the Northwest Territories and in the uranium mines of northern Ontario.

Similarly after graduation from high school, Fr. MacLellan taught in a country school in West Lake Ainslie with 30 students in eight grades. In 1957, both began their pursuit of a bachelor’s degree at St. Francis Xavier University in Antigonish, NS. Like MacLeod, Fr. MacLellan paid for university, working summers in the uranium mines at Elliott Lake, ON. Fr. MacLellan described graduation day in May 1960 as “the happiest day of my life. The future looked bright. Many different fields seemed to open up all at once.”

After that day, their lives took separate paths. Fr. MacLellan returned temporarily to the mines in the central Quebec town of Chibougamau, where he later taught and served as principal of the local high school. He entered the Redemptorist Novitiate in 1961 and was ordained in June 1965. Appointments varied from the missions to chaplaincy in prisons and schools. From the final assignment as chaplain at Monsignor Pereyma Catholic Secondary School, Oshawa, Fr. MacLellan received heart-felt tributes, awards and the Queen’s Jubilee medal for being “full of kindness, a man of inspiration, who goes all out to help others.” After his death in 2008, the Pereyma school chapel and an alternative high school in the Oshawa area were named in his honour.

For MacLeod, his path led to academe. Earning a doctorate in English at the University of Notre Dame, he taught for three decades at the University of Windsor as a professor of English and creative writing. Former students and colleagues described MacLeod as approachable, kind and gentle guide to aspiring writers. MacLeod rose to prominence after the 1999 publication of his novel No Great Mischief, which was nominated for all Canada’s major literary awards and won the prestigious 2001 International IMPAC Dublin Literary Award.

It was during the summers in Inverness County that they met, exchanging cordial greetings.

Peggy Kennedy noted that the summers began when the MacLeods arrived. The author, his wife, Anita MacLellan, a distant relative of Fr. MacLellan’s family, and their seven children lived on the MacLeod homestead at Dunvegan. In a cliff-top cabin, MacLeod spent the mornings writing.

Despite all the fame, MacLeod remain humble and a nice man, she added.